Eddie McClintock was one of those guys who showed up on a lot of TV shows over the years without finding a permanent place to nest and spread his wings—that is, until SyFy chose him to star opposite Joanne Kelly in its signature series, Warehouse 13. 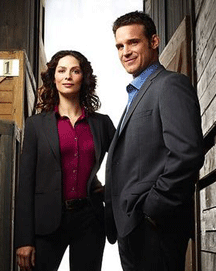 The show debuted last summer to high expectations and it quickly delivered, giving the channel’s new spelling of its name a boost and launching a growing fan base for Warehouse 13’s leads, McClintock and Kelly.

Tonight, Warehouse 13 returns at 9 p.m. for the opening salvo of its second season on SyFy.

But enough about the show. Let’s talk about Eddie McClintock, professional tweeter or twittererererr… This is a man who appreciates the turn his life has taken and isn’t afraid to blurt it out.

“Just want to say THANK YOU SO MUCH to everyone who has helped make #WAREHOUSE13 a dream come true for me. now…LET’S KICK SOME ASS!! –Eddie” (8 AM Jul 6th)

This is also where we can learn what song Eddie is whistling—yesterday, it was “Killer Queen”—or that the cast and crew saw the season two premiere in a real theater, which made us all envious!

EDDIE McCLINTOCK: “I want the show to succeed so badly that I act as my own PR person in that regard. I know I come off as, ‘Look at me, look at me.’ But I’ve got two sons at home who I need to take care of. I’ve kicked around Hollywood long enough; I don’t want to go out and look for another job. I love my job. I’m desirous of hanging on to it and hanging on to Warehouse 13. That’s why I do what I do. And… I have OCD and it’s fun.”