I can’t honestly recall ever hearing a Philadelphia Phillies game called by the late Harry Kalas, but after being exposed to the man and his life in the pages of Randy Miller’s fascinating biography, Harry the K, I feel like I missed out on something special. 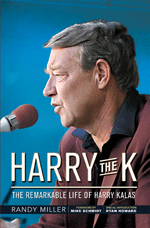 Don’t misunderstand: Harry Kalas was no saint. He loved baseball, of course, but also wine, women and song—and I mean that quite literally, as I believe Randy Miller will tell you momentarily.

One more thing: I’m doing this interview under protest since the 2008 Phillies wiped up the floor with my beloved Rays in the World Series this year—and then stuck us with Pat Burrell.

RANDY MILLER podcast excerpt: “Jasmine, as much as she was hurt, she still believes that Harry Kalas was the best man she ever met. To this day, she worships the ground Harry Kalas walked on. She thinks she’s going to be reunited with him in Heaven.”