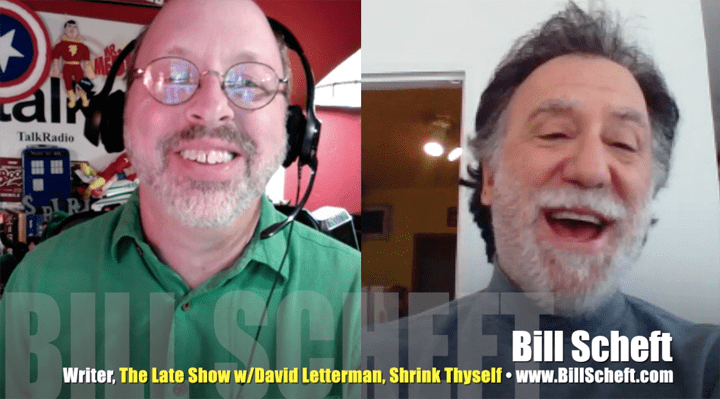 Watch this exclusive Mr. Media interview with Bill Scheft, author of novels including Shrink Thyself, Everything Hurts, The Ringer, and Time Won’t Let Me, as well as a long-time writer for “The Late Show with David Letterman,” by clicking on the video player above!

Mr. Media is recorded live before a studio audience full of monologue lovers who are so glad I’m not doing one today… in the NEW new media capital of the world… St. Petersburg, Florida!

Traub is a fictional character. He has no chance.

BILL SCHEFT podcast excerpt: “The book, Shrink Thyself, is about a guy trying to live a non-psychological life. He leaves therapy and tries to lead an unexamined life. I thought it would be a great inside joke with myself if I wrote the book in the first person because this guy, trying to live in the moment, is so self-involved, so self-absorbed. It’s a joke I hoped the reader would pick up on.”

Scheft, on the other hand, I’ll give a .463 shot at it. Why .463? That was famed Boston Red Sox rightfielder Tony Conigliaro’s career slugging percentage.

What does Conigliaro have to do with it? If you don’t know, you obviously haven’t read Scheft’s fourth novel, Shrink Thyself, have you?

BILL SCHEFT podcast excerpt: “Every comic (looks at David Letterman) and thinks, ‘I could do that. I do a monologue; I’ve got plenty of time. Ask a few questions.’ And you know what? Every comic is right. They could do it — for a night. For two nights. But 33 years??? I have seen Dave talk to actors, actresses, rave about their movies very specifically. And I will go up to him after the segment and say, ‘So you liked that movie?’ And he will go (shakes head). It’s a performance.”

Sheft’s new comic fiction about an aimless TV news talk show producer, Charlie Traub, who wants to be a sportswriter, is all about the unexamined journey, less so the destination. It follows the disintegration of our man Traub as everything that could go wrong in his life, does.

What does Traub learn about himself? Does one disaster after another change his life?

Not necessarily. He’s still the same unlovable loser, slipping away a little more every day of his miserable existence.

That’s not the case for Scheft, however, who has been a staff writer for David Letterman since 1991, is the author of three previous novels, and is married to comedian Adrianne Tolsch.

BILL SCHEFT podcast excerpt: “I was a sportswriter before I became a comic. When I met my agent, she asked me a question. I started to answer and said, ‘Wait, let me go back five years.’ She said, ‘You talk just like you write!'”

This is Scheft’s second time around on Mr. Media — he is mentally preparing for Letterman’s final Late Show sometime in 2015. The first time, we talked about Everything Hurts. You can still hear it anytime in the archives.