Mr. Media is recorded live before a studio audience of 47-year-old fanboys who could really stand to take a bath and develop some practical business skills besides knowing how many comics fit snugly in a longbox… in the NEW new media capital of the world… St. Petersburg, Florida!

It’s been a while since business writer Daniel Pink was a guest on Mr. Media to talk about his first graphic novel, Johnny Bunko: The Last Career Guide You’ll Ever Need.

That book was intended for an audience of job seekers who lacked some basic skills needed to succeed in the modern workplace. They were also people who weren’t likely to buy and read Pink’s nonfiction, picture-less narratives such A Whole New Mind or Free Agent Nation.

COREY MICHAEL BLAKE podcast excerpt: “I found Chris Anderson’s email address. I said, ‘We’re interested in taking your book, The Long Tail, and introducing it to comic book fans.’ In 24 hours I had an answer: ‘Let’s talk to my agent.’ It hit his sweet spot. He loves to be an innovator and he is a comic book fan.”

Apparently Pink was on to something – Johnny Bunko has since been translated into 14 different languages. 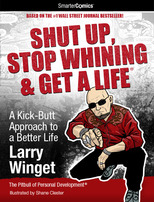 Now a company called Round Table is working with SmarterComics to turn Pink’s one-off project into an industry. It has produced graphic novels from six respected, bestselling business experts and is marketing them to an audience unlikely to read 300 pages of text but probably willing to invest the time and effort into a 50-page comic book full of immediately useful knowledge, told in an entertaining fashion.

At the top of the list of SmarterComics’ initial release this April 2011 is The Long Tail by Wired magazine editor Chris Anderson. Also noteworthy is an adaptation of the 2,500-year-old The Art of War by Sun Tzu, a classic battleplan for success found on the shelf of every modern CEO.

I know a little about educational comics myself, having written the biography of Will Eisner, who started the whole genre back in World War II with Army Motors. So I thought it would be interesting to have Round Table CEO Corey Michael Blake on the show to talk about his new enterprise.