It seems preposterous to me that anybody thinks they can make truck driving interesting and dramatic enough for a sixty-minute TV show. And this is the opinion of someone who has never missed an episode of a little show about Alaskan King Crab fishermen called “Deadliest Catch.”

Seriously? Seriously? Someone figured they could make an entire series about guys—and a couple of women—who drive enormous trucks across remote areas of Canada on roads of ice?

ALEX DEBOGORSKI podcast excerpt: “Once they’ve shot ‘Ice Road Truckers,’ once they’ve captured me, I don’t have any say (in the editing). Sometimes, I feel like they’ve shown me as a real ass. But that is reality! What can I say? I try not to worry about it. I’m not running for president or anything else. It’ll all come to an end one day and I’ll vanish into the dust of time.” 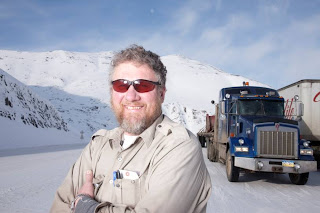 Well, believe it, because the most popular show on the History Channel is called “Ice Road Truckers,” it attracts 3 million viewers per episode and, with its fourth season starting on June 6th, it has made a pop culture hero out of a simple, bearded man named Alex Debogorski.

I think the difference between people who get this show and those who don’t is the difference between people who have driven trucks and those who haven’t. I drove a truck for a while in college, navigating the treacherous highways and surface roads between Gainesville and Ocala, Florida, traversing the hazardous Paynes Prairie… okay, it was neither treacherous or hazardous to me, but it was for everyone on the road when I was. I had no training and no idea what I was doing. There is a motel owner in Ocala who will testify to that effect after I drove a too-tall truck under his too-low lobby canopy and relocated it.

Joining me today is the star of “Ice Road Truckers.” He’s calling in from London, of all places, and I certainly hope he’ll tell us why in a moment.